Glanbia became the first commercial company in Kilkenny to recognise the worth of Kilkenny Archives Ltd., and see a community value in what it does. Last year it handed into the safekeeping of Kilkenny Archives all its old Creamery Records and a very generous dontation which paid for the accessioning and boxing of these valuable Kilkenny Creamery records, most of which were old Minute Books.

The archives of many of the long-established creameries that subsequently became part of Waterford Foods and Avonmore Foods, which combined in 1997 to create Glanbia, are now housed in the care of the St. Kieran’s College-based Kilkenny Archives and are accessible for public viewing. 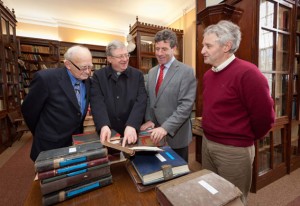 In the course of researching a history of Glanbia to commemorate the 10th anniverary of the merger – and the subsequent publication of Glanbia – The Story So Far, many records were located throughout the South East and are now part of the Glanbia Archive which is on a long-term loan to Kilkenny Archives Ltd.

“Glanbia has a long and proud history embedded in the Co-operative movement of late 19th and 20th century Ireland”, said Glanbia chairman Liam Herlihy. “We have evolved from more than 50 individual companies and co-ops in a vibrant international cheese and nutritional solutions company which is today exporting to more than 100 countries worldwide. This growth and succss is a tribute to our forefathers and we value the lessons learned from these men and women who worked tirelessly to create the co-operatives, which are the bedrock of Glanbia”.

Among the records lodged include the minute books and papers of Kilmanagh Co-operative Creamery, which is one of the oldest – if not the oldest – creamery in Kilkenny.

Records relating to other Kilkenny Co-Operative Societies are also known to exist and the search is now on for them. Anyone with further information or material for inclusion in the Glanbia Archive is asked to contact Glanbia’s head office at 0567772200 or John Kirwan at Kilkenny Archives Ltd at 0857484291 or email kerevanjp@googlemail.com